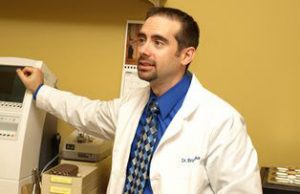 Dr. Blake graduated from The New England College of Optometry in Boston Massachusetts in 1997: Graduating with clinical and academic honors.

Dr. Blake ranked near the top of his class. His academic achievements were noticed by the faculty and he was asked to tutor his fellow students in a variety of subjects. Clinically he was also given distinguished placements such as the Joslin Diabetes Center (affiliate of the Harvard Medical School) and the United States veterans hospital caring for war veterans.

He is a member of the College of Optometrists of Ontario and of the Beta Sigma Kappa International Optometric Honor Society. He holds a licence in both Canada and the United States. He was trained by and is affilitated with the leading laser vision surgeons in North America and has had lasik himself.